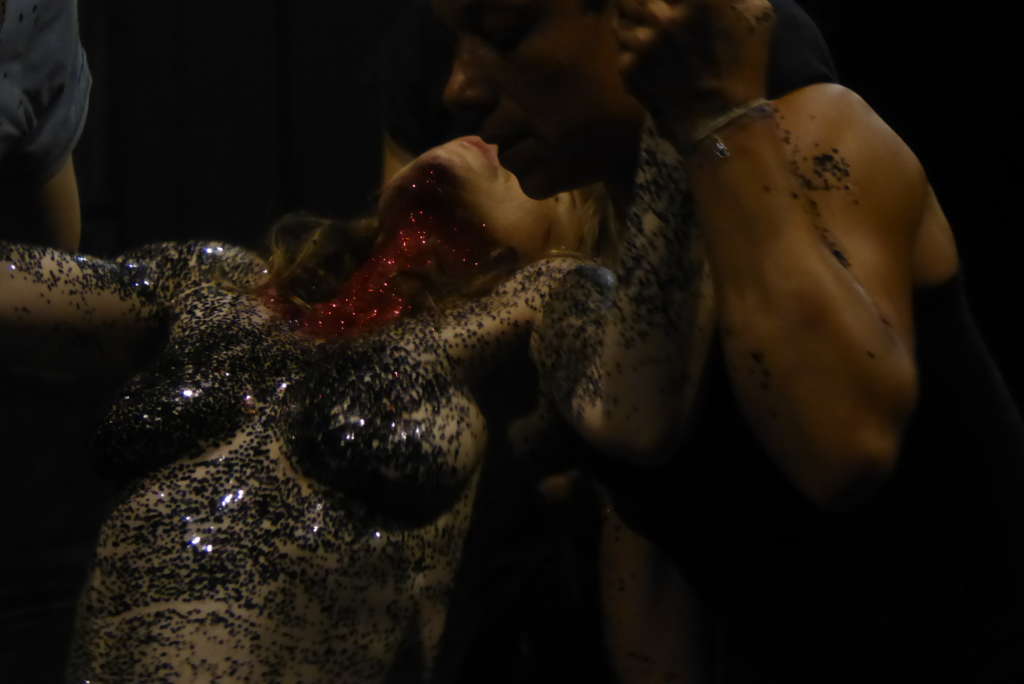 What can bodies do in the desolation that fragments and isolates them, sending each one back to his fears, installing dominations by exercising "power over" the world, beings, others? Let us try to oppose the emergence of a "power from within". The American eco-feminist activist Starhawk invites us to dream the dark. No longer run away from it. Admit it to yourself. Invent rituals, trance in the present time; thus connecting to the world, to its deep powers, not hostile but active. In this way connect beings.
In this last night, four dancers, accompanied by two musicians, open, together, a space where to rehabilitate the obscure. The group is carried by a movement of common energy. From this choir emerges the singularity of the dance of each one. Here each one watches over the dance of the other. A song emerges, like an offering. Borders move. Erotic force is summoned. Dark and luminous, a ceremony of a new mysticism is invented, to try, together, to « manufacture hope on the brink of the abyss » (I. Stengers).

« In dance, as in theatre, there is a choice. Some pieces expose a representation of the world, a bit like an image, that the spectators watch. Other pieces, in a different way, are lived as an experience grappling with the world, that the spectators feel. There is no doubt that the choreographer Hélène Rocheteau rather draws us towards this second option, in her piece La Nuit Manquante III, in which four dancers and two musicians move at ground level. This is a very rare piece, which deals with the feeling of fear. It is a beautiful question of dance, which links the mental and the organic in an echo, all intertwined. But is there only one fear? Is it that simple? Could we at least distinguish two kinds: a fear that we would run away from, in the loss of self and separation, which has unfortunately become common in the political texture of our time. And perhaps another fear, which we would prefer to delve into, to tackle, knowing that yes, there are dark, worrying, but undoubtedly fertile strata deep within us, of which it is not enough to conclude that rejection is the only option. La Nuit Manquante III is absolutely not a butô dance piece. But it is not insignificant to note that Hélène Rocheteau was passionate about this Japanese contemporary dance movement. Butô is known as the "dance of darkness". Or a "dance of the dark body". On another side of the coin, the choreographer is interested in ancestral witch figures. These women, linked to a flesh that is not very visible to the world, contradicting the dominant customs, were subjected to a formidable stigmatization, a rejection in the separation. In the 21st century, we find feminists, ecologists, inventors of life, to restore witch rituals, new links to the world. Of course, dance could be part of such celebrations. For every night that goes by… »